The NYU Urban Expansion Program is one of two research and action programs at The NYU Stern Urbanization Project, a think tank and urban action center of the Stern School of Business at New York University (NYU). The program is dedicated to assisting municipalities of rapidly growing cities in preparing for their coming expansion, so that it is orderly and so that residential land on the urban fringe remains plentiful and affordable. Its work is divided into two components: Making Room for Urban Expansion and Monitoring Global Urban Expansion. Part of the funding of the program’s activities comes from the NYU Stern School of Business and the NYU Marron Institute of Urban Management and another part from its partnerships with other organizations, municipalities, and governments. The overall rationale for the program is laid out in a book titled Planet of Cities [Cambridge MA: Lincoln Institute of Land Policy, 2012]. The program is described in a recent article in The Economist dated 21st June, 2014.

The primary mission of the NYU Urban Expansion Program is to lend assistance to the municipalities of rapidly growing cities in making room for their inevitable expansion, making realistic projections of the future land needs as well as minimum necessary preparations for accommodating the growth of their populations in an orderly and sustainable manner, ensuring that land remains plentiful and affordable. The secondary mission of the NYU Urban Expansion Program is to gain a better understanding of urban expansion the world over by monitoring it in the entire universe of the 4,000+ cities, and by collecting and analyzing evidence on the quantity of land required for urban expansion, on its physical organization and its affordability, and on the forces affecting it in a stratified global sample of 200 of these cities.

It has become quite evident that we cannot hope to slow down the urbanization process or to shift populations among cities. People are free to move within their own countries and their right to move is enshrined in the Universal Declaration of Human Rights. In other words, for all practical purposes the growth of the population of cities can be taken as given and there is little we can do about it. However, when we translate this population growth to the expansion of urban areas needed to accommodate it, there is a lot we can do about it. We all understand what it means to prepare adequate lands for urban expansion, enough land to accommodate both residences and workplaces, so as to ensure that there are no land supply bottlenecks and that land—and particularly residential land—remains affordable for all. Unfortunately, municipalities of many rapidly growing cities often underestimate the amount of land needed to accommodate urban expansion. Others simply refuse to prepare adequate lands for expansion because of budget limitations and other pressing needs, hoping against hope to contain it and usually failing in the attempt. In the minority of cases where expansion is effectively contained by draconian laws and decrees, it typically results in land supply bottlenecks that render housing unaffordable to the great majority of residents. 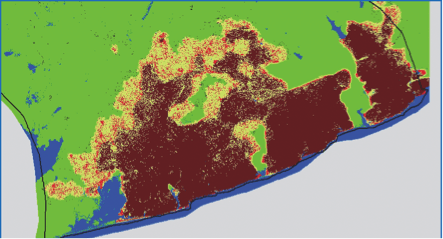 We studied the rates of urban expansion in a global sample of 120 cities between 1990 and 2000 (see http://www.lincolninst.edu/subcenters/atlas-urban-expansion/). While the population of the cities in this sample grew by 17%, on average, during this period, the built-up area of these cities grew by 28%, almost two-thirds faster than the rate of population growth (see figure 1).

We found, to our surprise, that the built-up areas of cities expanded faster than city populations because urban densities are in decline. They declined, on average, by 2% per year in this sample of cities. We also studied the rate of urban expansion in a global representative sample of 30 cities between 1800 and 2000. The area of 28 out of 30 of these cities grew by at least 16 times during the last 70 years of the 20th century (see the animation of the growth of Paris, Sao Paulo and Los Angeles online at: http://urbanizationproject.org/blog/30-cities-from-200-years-agoand-where-they-are-now#.VHjOcEtnwlI). Densities in these cities declined, on average by 1.5% per year from their peak densities. And if densities decline, on average, by 1-2% per year, the area of rapidly growing cities will not only triple in line with their expected population growth; it may grow by 4-7 times, on average. This may appear as a surprisingly high growth multiple, but there are examples, albeit only a few, of cities that planned for that growth multiple (see figure 2). Figure 2: Ildefons Cerdá’s Ensanche Plan for Barcelona, Spain, 1859, expanded its built-up area 9-fold.
As noted earlier, the mission of the urban expansion initiative is to alert municipalities in rapidly growing cities to the expected growth in the area needed to accommodate their population growth and to help them identify and prepare adequate lands to accommodate this growth.